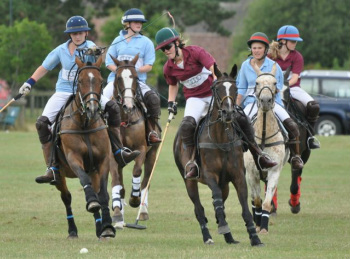 Polo is a team sport played on horseback in which the objective is to score goals against an opposing team. Sometimes called, "The Sport of Kings", it was highly popularized by the British. Mounts need to trained to be obedient, while the riders becoming active and practical horsemen who will compete with enthusiasm and determination. A Polo competition has served its purpose when the riders have learned better horsemanship, sportsmanship, and safety procedures.

In Pony Club the sport of polo is played in an arena (but may be played outside) and each polo team consists of three riders and their mounts. There are three levels of competition – Novice, Intermediate, and Advanced. Players score by driving a small air-filled ball, similar to a small soccer ball, into the opposing team's goal using a long-handled mallet. The game is divided into periods called chukkers, which last 7 ½ minutes in length of time each. 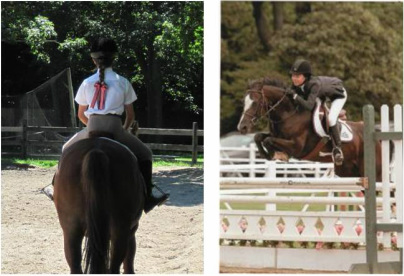 Hunter Seat Equitation was added in 2012 as specific discipline track for which members could earn Certificates. The Hunt seat style of riding is derived from the hunt field and Equitation is the art or practice of horse riding or horsemanship. More specifically, equitation refer to a rider's position while mounted, and encompass a rider's ability to ride correctly and with effective aids. In equitation competition, flat classes include judging at the walk, trot, and canter. In over fences classes, the competitor rides over a course jumps in any arena. There is no cross country jumping, as in Eventing.

Visit the United States Hunter/Jumper Association for more information and check out the Pony Club Hunter Seat Equitation pages to learn more. (You will need to log into the Pony Club site) 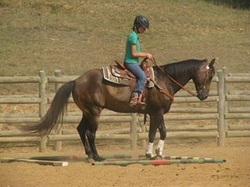 Pony Club is running a two year pilot program where members in select clubs or centers may earn Certificate in the Western discipline. Western riding is a style of horseback riding which evolved from the ranching and warfare traditions brought to the Americas by the Spanish Conquistadors. Cowboys needed to work long hours in the saddle over rough terrain, sometimes needing to rope cattle with a lariat (or lasso). Because of the necessity to control the horse with one hand and use a lariat with the other, western horses were trained to neck rein, that is, to change direction with light pressure of a rein against the horse's neck. Horses were also trained to exercise a certain degree of independence in using their natural instincts to follow the movements of a cow, thus a riding style developed that emphasized a deep, secure seat, and training methods encouraged a horse to be responsive on very light rein contact.

Though the differences in equipment appear dramatic, fewer differences between English and Western riding exist than most people think. Both styles require riders to have a solid seat, with the hips and shoulders balanced over the feet, with hands independent of the seat. As in English, there are many styles of Western, and Pony Club members may be exposed to these different styles of riding.

Tally ho! USPC was founded by a group of enthusiastic foxhunters who were familiar with The Pony Club in Britain. Many clubs today are still affiliated with a local hunt and are invited to participate in their hunts. Or clubs may expose members to Foxhunting by holding mock foxhunts. Hunter paces and hunter trials are also ways to introduce members to the sport. Visit the Masters of Foxhounds Association of America for more information and check out the Pony Club Foxhunting site for information on Pony Club activities and opportunities in the sport of Foxhunting. (You will need to log into the Pony Club site) 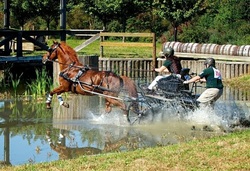 The sport of Combined Driving is similar to the discipline of Eventing, where the horse must perform in three different phases.  The first day is Dressage, testing balance, flexibility, and submission of the horse. Second day is Cross Country Marathon with up to eight special obstacles or hazard testing the horses endurance and stamina over distance. The third day is Cones, which tests the concentration and self control of both horse and driver as they negotiate between sets of cones laid out in an elaborate course. 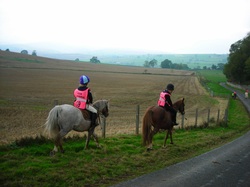 In Pony Club, the discipline of Distance Riding is a combination of Endurance Riding and Competitive Trail.  Participating in Distance Riding members will learn about the conditioning of horse and rider over long distances.  During a Distance Riding activity, the winning horse is the first one to cross the finish line while stopping periodically to pass a veterinary check that deems the animal in good health and fit to continue.  Visit the American Endurance Ride Conference and the North American Trail Ride Conference for more information on these sports. 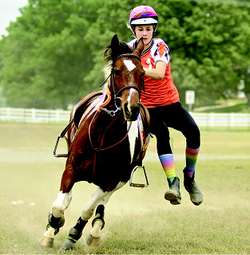 Vaulting is gymnastics on a moving horse, an ancient sport that had its beginnings in the bull vaulting of the ancient Minoans. It was used in the training of cavalry troops since Roman times, throughout the Middle Ages and into the Twentieth Century. Vaulting became an Olympic event in the 1920 Olympic Games in Antwerp, where the competitors were cavalry teams.   Visit the American Vaulting Association for more information on the sport of Vaulting.